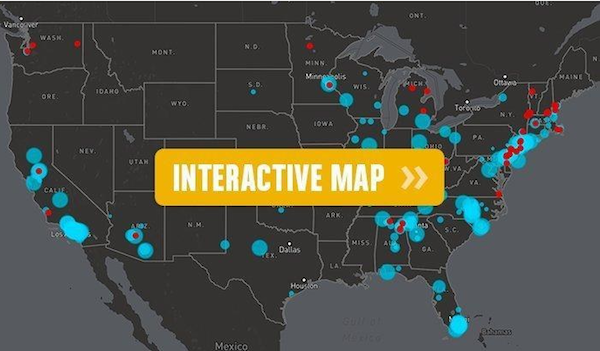 Research from the Environmental Working Group (EWG) and Northeastern University in Boston places mostly downstate New York and much of New Jersey on the list of its 27 states, and about 15 million people, living with water utilities reporting PFC chemicals in its drinking supply.

PFCs, also categorized as PFOs and PFOAs, made headlines this month as Cape Fear River/Wilmington area residents of North Carolina just became aware of such chemicals in their drinking water this month. EWG & Northeastern University’s report “Mapping A Contamination Crisis” was release June 8th in the midst of North Carolina’s awareness of GenX, a PFC, in its drinking water supply. PFC chemicals, sometimes called the “teflon” chemicals, are linked to cancer, liver and kidney diseases, thyroid diseases, weakened immune system, and endocrine diseases.

“On the map, blue circles show public water systems where PFCs were detected in public drinking water systems – the larger the circle, the more people served by the system. Clicking on a circle brings up detailed information, including contamination levels. Red dots indicate a contamination site in Northeastern’s PFAS Contamination Site Tracker. Clicking on a dot brings up detailed information and links to more information and resources from the Institute.

The map, which will be updated as more contamination is discovered, is the most comprehensive resource available to track PFC pollution in the U.S. …”

PFCs in our area is spread throughout the state of New Jersey in multiple locations including red zoned areas in Montclair, South Orange, Colts Neck at the Naval base, the McGuire-Dix base in Lakehurst, Paulsboro, and Deepwater townships. Additional New Jersey water utilities in blue include Mahwah, Fairlawn, Garfield, Montclair, Elizabeth, Edison, Woodbridge, Rahway, Point Pleasant, Florence, Atlantic City and many other areas. In New York, the concentration is downstate on Long Island in Hempstead, Garden City, Floral Park, Babylon, and Southampton.

Here is a closeup of the map for our region. 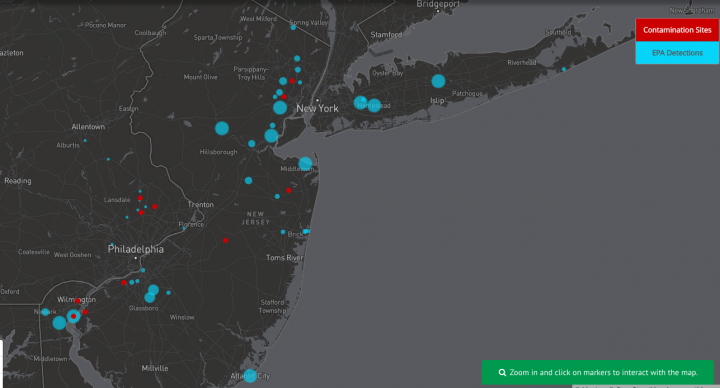 Contact Aqua Right for your free water test today. Find out what’s in your water. Clean your own tap water.